Environmentalists warn that Shanxi’s fight to save its ailing coal industry by handing out tax cuts will increase pollution, damage the environment and hurt it’s people. 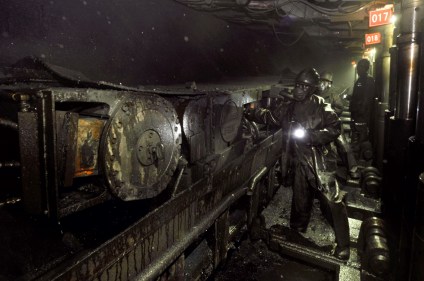 Miners work at an underground coal mine in Changzhi, Shanxi province.

A small boy walks through the smog of Donglu, on the outskirts of Linfen, where villagers have difficulty in selling their crops because of the severe pollution. Linfen, a city of about 4.3 million, is one of the most polluted cities in the world.

Migrant workers at coal mine outside Datong in Shanxi Province. Datong is dubbed as the coal capital of China and the province Shanxi is the largest producer of coal in the country.

Children must suffer with the pollution from the Changzhi, Shanxi province coal mines 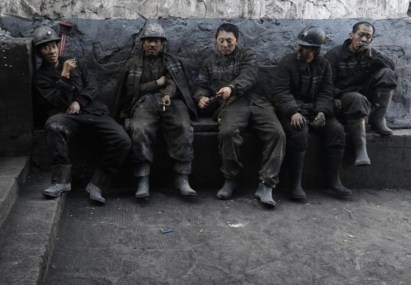 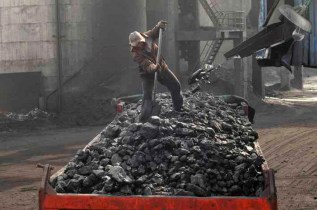 A labourer loads coal onto a truck at Sanyuan Coal Mine in Changzhi, Shanxi province, China 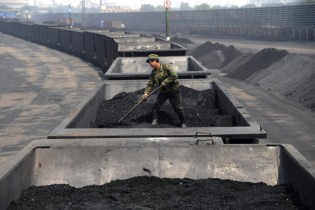 The centre of China’s coal industry is in steep decline. Shanxi province, in northern China, has long relied on its natural coal resources, but is now suffering from a drop in domestic demand amid China’s economic downturn. Coal prices have plunged to their lowest level in four years.

In the first five months of 2013, nearly half of coal companies reported losses and 149 coal companies ceased production. The total losses of the coal industry amounted to 6.61 billion yuan, while its profits reportedly shrunk by 12.8 billion yuan on a year-on-year basis.

The industry’s decay will inevitably leave a huge hole in provincial fiscal revenues – in 2011 the Shanxi government collected more than 40% of its revenue from the coal industry. According to statistics from the Shanxi provincial tax department, tax collected from the coal industry decreased by 11.7 billion yuan in the first six months of 2013. In Liulin county, many public-funded infrastructure projects have been suspended due to fiscal difficulties.

Shanxi has responded to the slump with a stimulus package. Shanxi officials have been tasked with promoting the sales of local coal, a measure rarely seen since the late 1990s. As well as mobilising local officials to become salespersons for the ailing coal industry, the provincial government announced 20 measures aimed at stabilising the coal market. This included temporarily scrapping the environmental protection fees and industrial transformation development charges for coal mines. The Global Times estimates this will cut local coal companies’ production cost by 15 yuan per tonne alone, and increase profits by almost 900 million yuan.

Gao Jianfeng, the director of a governmental energy economic think tank applauded the scrapping of fees, arguing that it “demonstrates the government’s determination…to ease the mounting pressures from coal companies and increase the competitive edges of the industry.”

Yang Fuqiang, a senior adviser on energy, environment and climate change at the US-based green pressure group Natural Resources Defence Council (NRDC), says there is room for fee deductions because the tax duties for the coal industry are very high – tax and administrative charges for coal amounts to roughly 130 to 150 yuan per tonne, making up nearly one-quarter of the current coal price.

While this may be an industry-saving initiative, there are concerns about its environmental cost. Feng Yongfeng, the founder of Nature University, a Beijing-based Green NGO, said the government’s move was “yet another example of sacrificing the environment for the sake of the economy.” The stimulus package could “cause severe harm to…the country’s goal of reducing emission and conserving energy.”

Li Gan, founder of the legal website, Public Interest Litigation, echoed Feng’s concerns when he asked on Weibo: “When saving the coal industry, can we really afford to sacrifice the environment?”

Some would argue the concerns are not misplaced. Environmental protection authorities have estimated that the cost of the ecological losses caused by coal mining since the 1970s, amounts to 487.5 billion yuan.

Local residents in Shanxi have also been gravely affected by the coal industry. The rate of birth defects in Shanxi is six times higher than the national average.

Despite the important role the coal industry has traditionally played in Shanxi’s economy, some observers are arguing that the provincial government’s eagerness to prop up the industry might be misguided.

Yang Fuqiang of the NRDC told chinadialogue that “the intention is good, but what Shanxi really needs is to end its overdependence on coal. The coal market recession is a good time to use the market to push for coal industry restructuring and let the market’s natural selection take effects.”

Greenpeace East Asia’s Li Shuo told chinadialogue that “the dwindling coal use is, to a certain degree, the corollary of China’s slowing growth and economic restructuring. On top of this, the efforts to fight air pollution and control water pollution would not allow China to continue its rapid growth of coal use.”

Yet there are no signs of preparations to cut down on coal production. Earlier in July, Shanxi Governor Li Xiaopeng held talks with China’s top five state-owned electricity utility enterprises, aiming to contribute to the securing of long-term coal procurement deals and power plant investments. Before becoming governor of Shanxi Province, Li Xiaopeng, the son of former Primer Li Peng, was part of the management of Huaneng, China’s electrical utility giant.

At least one of the five electricity utility giants has reportedly signed cooperation deals with Shanxi’s coal companies.

“The reason why the top fives are happy to work with Shanxi coal companies is that they have the desire to offer coal buying contracts in return for power generation projects permissions…It could well be a new round of the enclosure movement and the beginning of overcapacity,” said an unnamed source in a report by National Business Daily.

Shanxi’s efforts to revive its coal industry arguably also deviate from central government policy. In December last year, a guideline on thermal coal market issued by the State Council specifically required that “all local governments should not interfere with the normal business operation of coal miners and power companies.”

Shanxi’s eagerness to invite power plant investments may yet hinder the central government’s efforts to reduce emissions and conserve energy, said Li Shuo. China, the world’s largest carbon emitter, has committed to reducing its emissions per unit of GDP by between 40% and 45% from 2005 levels by 2020, as well as using non-fossil fuels for about 15% of its energy by 2020. 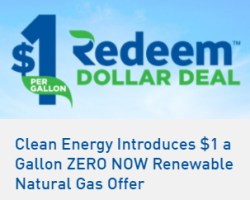