Devastating impacts on our environment, health, social justice, food production, coastal city infrastructure and economies cannot be avoided if we maintain a slow and steady transition to a zero-carbon society.

According to Stefan Rahmstorf, Head of Earth System Analysis at the Potsdam Institute for Climate Impact Research, we need an emergency response.

A big part of this response needs to be transforming the energy sector, the principal contributor to global warming in Australia and many other developed countries.

Many groups have put forward ideas to transition the energy sector away from carbon. But what are the key ingredients?

Technology is the easy bit
At first glance the solution appears straightforward. Most of the technologies and skills we need â€“ renewable energy, energy efficiency, a new transmission line, railways, cycleways, urban design â€“ are commercially available and affordable. In theory these could be scaled up rapidly.

But in practice there are several big, non-technical barriers. These include politics dominated by vested interests, culture, and institutions (organizational structures, laws, and regulations). 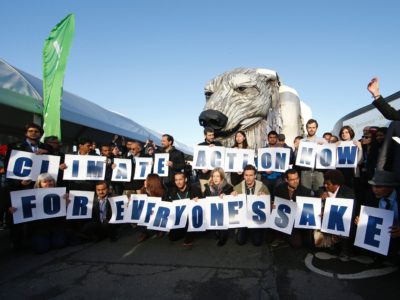 To overcome this barrier, we need strong and growing pressure from the climate action movement.

There are numerous examples of nonviolent social change movements the climate movement can learn from. Examples include the Indian freedom struggle led by Gandhi; the African-American civil rights movement led by Martin Luther King Jr; the Philippine People Power Revolution; and the unsuccessful Burmese uprising of 1988-90.

Several authors, including Australian climate scientist Matthew England, point out that nations made rapid socioeconomic changes during wartime and that such an approach could be relevant to rapid climate mitigation.

Learning from war
UNSW PhD candidate Laurence Delina has investigated the rapid, large, socio-economic changes made by several countries just before and during World War 2.

He found that we can learn from wartime experience in changing the labor force and finance.

However, he also pointed out the limitations of the wartime metaphor for rapid climate mitigation:

Unfortunately itâ€™s much easier to make war than to address the global climate crisis rapidly and effectively. Indeed many governments of â€œdemocraticâ€ countries, including Australia, make war without parliamentary approval.

According to Climate Action Tracker, the 158 climate pledges submitted to the United Nations by December 8 2015 would result in around 2.7â„ƒ of warming in 2100 â€“ and thatâ€™s provided that all governments meet their pledge.

Nevertheless, inspiring case studies from individual countries, states and cities could lead the way to a better global outcome.

Iceland, with its huge hydroelectric and geothermal resources, already has 100% renewable electricity and 87% renewable heat.

Denmark, with no hydro, is on track to achieve its target of 100% renewable electricity and heat by 2035.

Germany, with modest hydro, is heading for at least 80% renewable electricity by 2050, but is behind with its renewable heat and transport programs.

Itâ€™s easier for small regions to reach 100% renewable electricity, provided that they trade electricity with their neighbors. The north German states of Mecklenburg-Vorpommern and Schleswig-Holstein are generating more than 100% net of their electricity from renewables.

The Australian Capital Territory is on track to achieve its 100% renewable electricity target by 2020. There are also many towns and cities on programs towards the 100% goal.

If the climate action movement can build its strength and influence, it may be possible for the state of Tasmania to achieve 100% renewable energy (electricity, heat and transport) and for South Australia to reach 100% renewable electricity, both within a decade.

But the eastern mainland states, which depend heavily on coal for electricity, will need to build new renewable energy manufacturing industries and to train a labor force that includes many more highly trained engineers, electricians, systems designers, IT specialists and plumbers, among others.

Australia has the advantage of huge renewable energy resources, sufficient to create a substantial export industry, but the disadvantage of a declining manufacturing sector.

There are already substantial job opportunities in renewable energy, both globally and in Australia. These can be further expanded by manufacturing components of the technologies, especially those that are expensive to ship between continents, such as large wind turbine blades, bulk insulation and big mirrors. 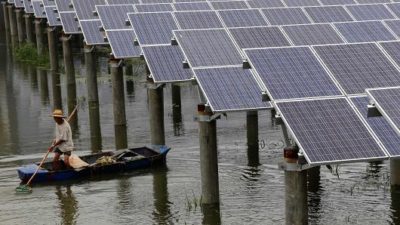 Transport will take longer to transform than electricity generation and heat. Electric vehicle manufacturing is in the early stage of expansion and rail transport infrastructure cannot be built overnight, especially in car-dependent cities.

For air transport and long-distance road transport, the only short-term solution is biofuels, which have environmental and resource constraints.

How long would it take?
The timescale for the transition to 100% renewable energy â€“ electricity, heat and transport â€“ depends on each country or region and the commitment of its governments.

Scenario studies (see also here), while valuable for exploring technological strategies for change, are not predictions. Their results depend upon assumptions about the non-technical strategies I have discussed. They cannot predict the timing of changes.

Governments need to agree on a strategy for transitioning that focuses not just on the energy sector, but includes industry, technology, labor, financial institutions, governance and the community.

Everyone should be included in developing this process, apart from dyed-in-the-wool vested interests. This process could draw upon the strengths of the former Ecologically Sustainable Development process while avoiding its shortcomings.

The task is by no means easy. What we need is a strategic plan and to implement it rapidly.